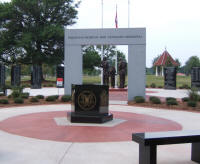 The Arkansas Korean War Veterans Memorial was dedicated on June 25, 2007, the 57th anniversary date of the beginning of the Korean War. Located in Little Rock's MacArthur Park, the Memorial Plaza features a 3' tall black granite pentagon bearing the emblems of the five military branches; a nearly 12' by 12' frosted gray granite entryway; and three larger than life-size bronze statues stand in the center of the plaza surrounded by a semi-circle of eight 3' wide x 6' tall black granite tablets. The tablets, weighing in excess of 3,000 pounds each, are engraved with the names of the 461 Arkansas servicemen and women killed in action, a description of Korean War events and a map of Korea. The Memorial was built by three divisions of Suhor Industries: SI Memorials, SI Veterans Memorials and SI Construction Services. 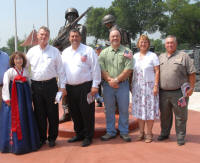 Naomi Rogers (left), the Korean-American Little Rock area resident whose vision it was to build the Arkansas Korean War Veterans Memorial, is pictured in front of the three memorial statues. Ms. Rogers formed the Memorial Foundation and was instrumental in raising most of the money that paid for the Memorial. Standing next to Ms. Rogers are (L-R) Brett Cargill, Mike Forbes, Tony Burnett, Pat Routh and Homer Routh. Cargill, Forbes and Routh are members of the SI team that designed and constructed the Arkansas Memorial Plaza. Burnett is owner of Superior Concrete, a project sub-contractor. 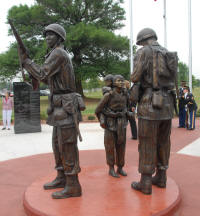 Three larger than life-size bronze statues are the central focus of the Arkansas Korean War Veterans Memorial Plaza. One statue is a combat soldier representing the fighting that took place in South Korea to stop the spread of communism. The second is of two Korean children representing the suffering of the Korean people during the war and the future generations of Koreans that have rebuilt that nation. The third statue honors the brave sacrifices that Combat Medics and Navy Corpsmen made to save the lives of others during this conflict. The statues were designed and constructed by Light and Time Design Studio and Art Foundry, Royal, Arkansas