The Piatt memorial commemorates the tragedy which occurred January 16, 1965, when a KC-135 Tanker plane crashed into the Piatt neighborhood, killing the air crew and many innocent civilians. The project began in May 2007 and the dedication ceremony was held on July 14, 2007. Funding for the memorial came in large part from a federal Community Development Block Grant.

Forty-two years after a fuel-filled US Air Force KC-135 Tanker jet crashed into the 20th and Piatt neighborhood of Wichita, an airplane-shaped memorial was dedicated. The victims' names are inscribed on the wing-shaped tablets that are a part of this 12 ft. high x 22 ft. wide, Imperial Black Granite monument designed and built by SI Memorials of Parsons, Kansas. Many attending the dedication of the Piatt Plane Crash Memorial were the crash victims' families and friends who still live in the area. 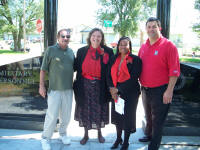 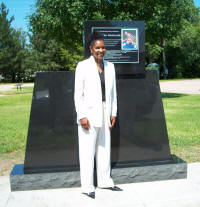 As part of the Piatt Plane Crash Memorial project, SI Memorials refurbished a monument honoring Lynette Woodard, a female basketball star at the University of Kansas who went on to star with the Harlem Globetrotters. SI repaired the original plaque, added a new ceramic color photo and mounted them on to the Imperial Black Granite that duplicates the design of the original concrete monument that stood in Piatt Park. Woodard, pictured with her monument, grew up in this Wichita neighborhood.